Take Me Out to the Ballgame!

The Florida Gators and Louisiana Tigers will be battling it out tonight at TD Ameritrade Park stadium for what could be the final game of the College World Series (click HERE for the latest updates!).

If you’re an avid baseball fan, chances are you’ve heard of the CWS. It’s been a highlight every summer in my hometown of Omaha, Nebraska, as far back as I can remember and just keeps growing, set to break the 2015 attendance records of over 353K this season. It’s baseball at it’s very best…and it also happens to be an especially fond memory for Yours Truly.

Funny how life plays out. Each year a drawing was held in the Omaha area for young men to serve as batboys for the participating college teams. Suddenly in 1972, the contest opened up to girls and I won the drawing. We received all sorts of goodies and our pictures were in the newspaper. It was pretty exciting for a 12 year-old girl, even though I didn’t know much about baseball. I did play softball in 6th grade for a team called the Penguins. Yep, that was the name. We never won a single game. I told them I didn’t want to be called the Penguins, but no one would listen. I’m sure we’d have won if we’d been called the Lazers, or Aces or Pit Bulls, but Penguins? Sheesh.

As fate would have it, I was randomly assigned to the University of Southern California Trojans. I had the time of my young life. Hanging out in the dugout at the iconic ole Rosenblatt Stadium most every day during the Series, watching all the activity behind the scenes, (hearing new and exciting words every single day LOL), and having a close-up view to all the action was a pretty big deal. 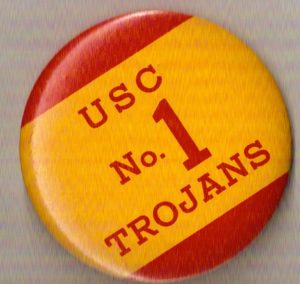 I took a bag of 100 pieces of bubble gum with me each time I showed for batgirl duty and immediately became quite popular. 🙂  I nixed the formal white, stuffy polyester uniform I was provided and embroidered TroGans in gold on the back pocket of my maroon cut-off shorts to wear, instead. Yep, I spelled it wrong. Totally embarrassing. 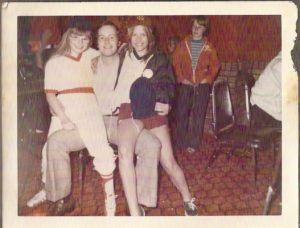 And when it was all said and done, the Trojans won the whole series. I even got to attend the celebratory party. I thought I was famous. ☺ Several of the players and staff became my pen pals for awhile.

One of the pitchers, Pete Redfern (click here to read about Pete!) , gave me his game hat. That was a serious gift. I kept it safe and hauled it all over the country for over 3 decades in a box of memorabilia.

Then one day, it occurred to me that perhaps he had kids of his own who would like to have it. It might mean a lot to him to have it back. It’s one thing to give your championship hat away when you’re young and single, but as a potential father, well, he might be kicking himself that he handed it off to me so many years ago.

I had my tech-saavy girls search for him on the internet. We found him and I sent it off after taking one more picture, now as a grandmother, wearing it. 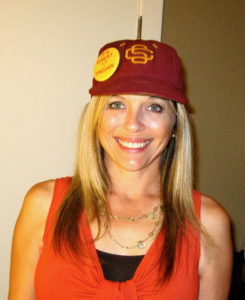 Within a week, he’d written me the kindest note. As we were looking for him online, we found he’d had a tragic diving accident in the middle of his professional baseball career and was now paralyzed. He had a grown son, who’d also played baseball. He’s also got a strong faith in God and included a Bible verse in his card to me.

I guess this qualifies as ‘a story most people wouldn’t know about me.’ We all have some of those, don’t we?

(Fun Fact: shortly after my hubby and I were married in the early 80s, he sang the national anthem at the CWS. He’s always had a singing voice that could melt butter.)